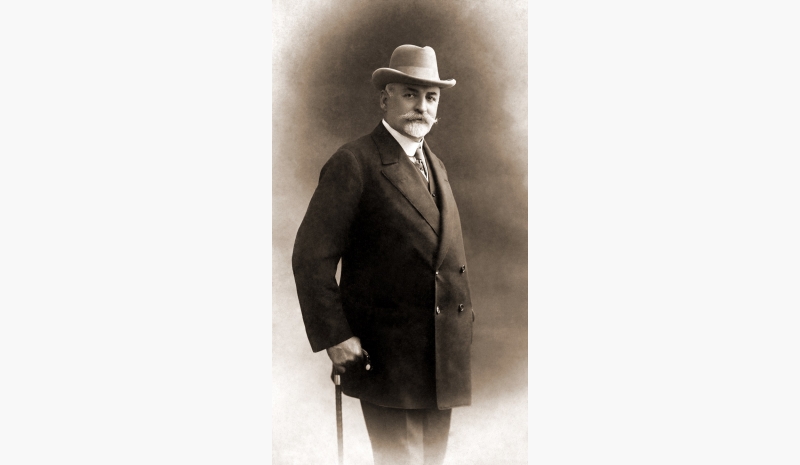 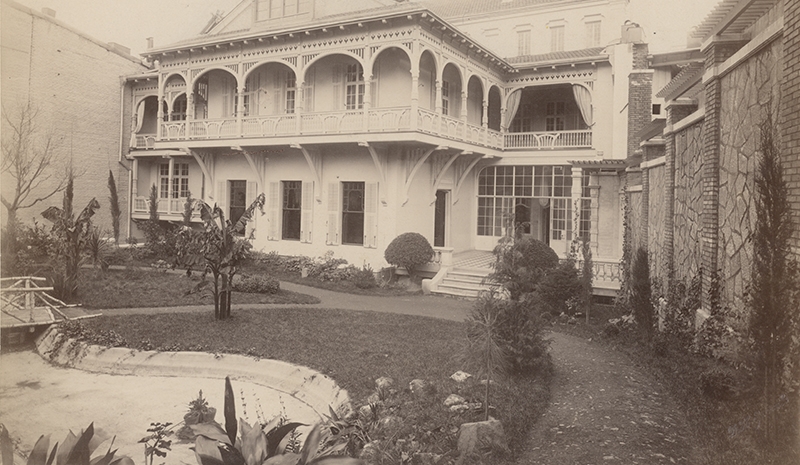 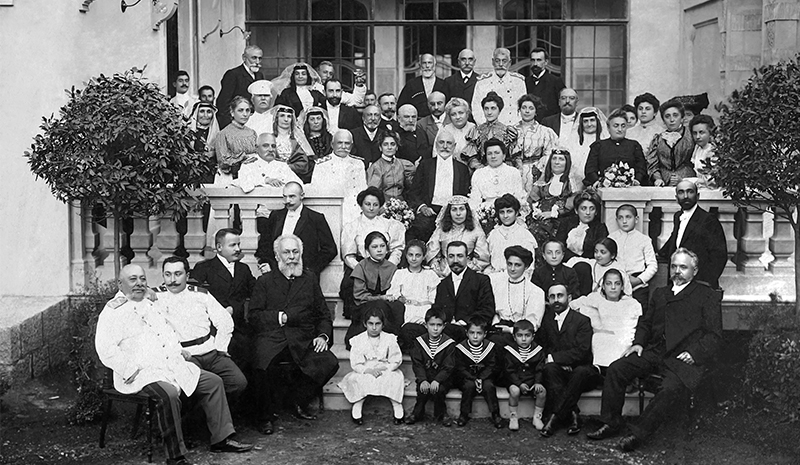 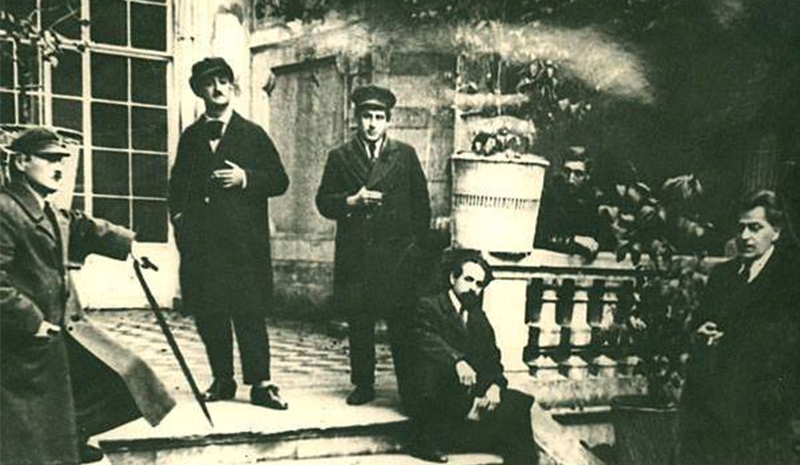 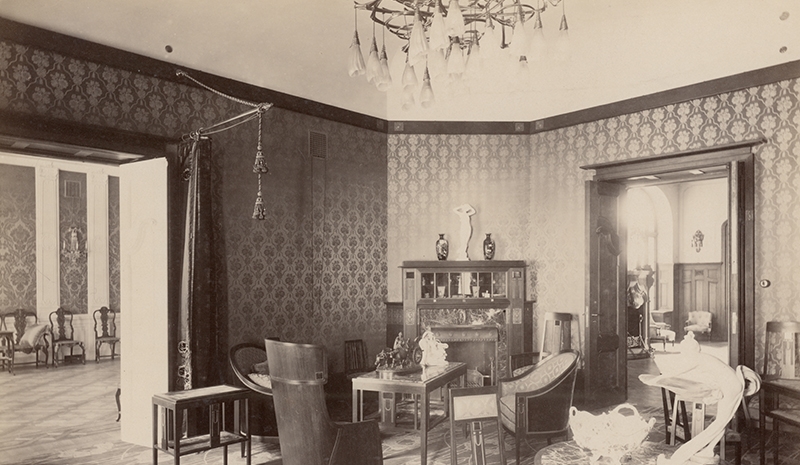 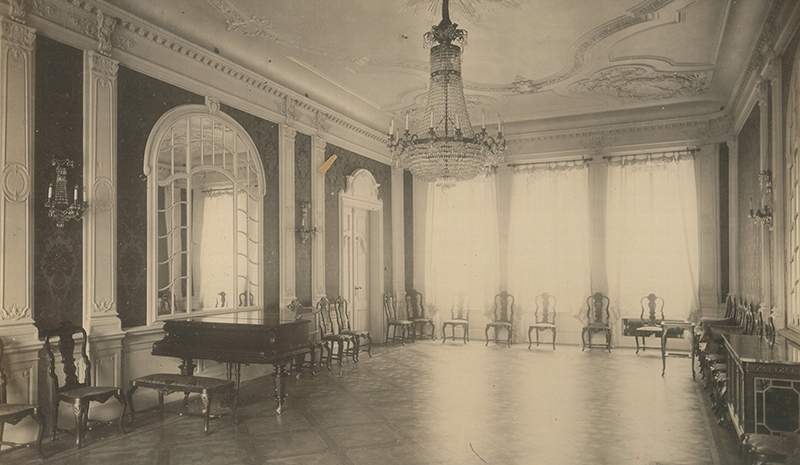 HISTORY OF THE HOUSE

The mansion, Writers’ House of Georgia is presently located was built in 1903-1905 by David Sarajishvili. David Sarajishvili (1848-1911) was a famous philanthropist, founder of Georgian brandy production, Doctor of chemistry and philosophy. The building was constructed by a German architect Carl Zaar, in collaboration with architects Tbilisi Aleksander Ozerov and Korneli Tatishev; the author of exquisite wooden interior was the Georgian craftsman Ilia Mamatsashvili. The building is a great example of Art Nouveau architecture and is acknowledged as a brilliant blend of Georgian and European architectural styles.

The terrace of the Sarajishvili house is designed by ceramic tiles of famous Villeroy & Boch Company. Tiles with similar forms and patterns were an extreme rarity and were produced only on special orders. Cologne Cathedral in Germany, Bolshoi Theatre of Moscow, Abbey of Einsiedeln in Switzerland – these are the buildings, tiles similar to those on the terrace of the Writers’ House can be found.

David Sarajishvili commissioned to build the house for the 25th anniversary of his wedding with Ekaterine Porakishvili. The house immediately turned into an important center of the city’s cultural life. It frequently hosted literature and art evenings, followed by pleasant Georgian feasts. The guests of the house were Akaki Tsereteli, Gigo Gabashvili, Arthur Leist, Valerian Gunia and others.The first exhibition of famous Georgian painter Gigo Gabashvili was held here.

David Sarajishvili died in 1911 after a severe illness. His will once again astonished the public. According to his will, the major part of his multi-million property was supposed to serve the development of Georgian nation. The house on Machabeli street was left to his wife. However, there was a second assumption - the wish of David Sarajishvili was to turn the house into the exhibition space for folk craftworks. This information was published in a Russian newspaper “Тифлисский листок”, citing one of the Georgian newspapers as a source. Later, due to financial problems, the family decided to put the house on the auction and in 1918, upon the request the Georgian public, it was bought by a famous Georgian businessman and philanthropist Akaki Khoshtaria (1873-1932).

In 1921, after Georgia’s sovietization, Akaki Khoshtaria was forced to leave the country and immigrate. With the decree of Revolutionary Committee of Soviet Georgia, on the 3rd day of the Sovietization, on February 28, 1921, the house was bestowed to writers and different art circles of Georgia. In the 20-ies this house was even called Palace of Arts. The 1925-26 newspaper “Reference Book” edited by poet Titsian Tabidze states: “The Palace of Arts was founded in 1921, in the first days of Georgia’s sovietization. As per appeal of the delegation of Writers’ Union, with the special decree the Revolutionary Committee declared the former house of Sarajishvili and Khoshtaria as Palace of Arts… The Palace is run by the committee of Artists’ Union, comprised of representatives various fields.” Soon afterwards, in 1923, Writers’ Union was separated the Artists’ Union as an independent body and until 2007 the house belonged to Writers’ Union of Georgia. Paolo Iashvili, Titsian Tabidze, Mikheil Javakhishvii, Pavle Ingorokva, Galaktion Tabidze, Konstantine Gamsakhurdia, Giorgi Kuchishvii - this is the short list of persons who were frequent guests of this house. In various years, chairmen of Writers’ Union were Kote Makashvili, Simon Chikovani, Giorgi Leonidze, Irakli Abashidze, Grigol Abashidze, Nodar Dumbadze, Mukhran Machavariani, Guram Panjikidze, Shota Nishnianidze and others.

For years this house was the center and witness of many historical events, which increases its memorial significance. However, apart pleasant and interesting events and meetings many dramatic histories are related to this house. The most tragic is the suicide of a famous poet Paolo Iashvili. He committed suicide with a shotgun on the second floor of this building while the Writers’ Union meeting was held downstairs. By reading the documents and sources that time, one could easily guess that Paolo Iashvili is a victim and his death was more a murder implemented by Soviet regime, rather than a suicide. Constant denouncing on each other, unjustified accusations, absurd crimes, continuous confrontations among the writers forced everybody to stay silent or to accuse a friend in order to survive. Not many could handle such pressure. Apart poet Kolau Nadiradze, none of Paolo Iashvili’s friends attended his funeral. Paolo was of course not the only victim of the Soviet regime; many famous and talented writers, poets and artists shared his faith in one form or another. Such repressions continued for a long time and ceased only in 1960-ies.

Since October 2008 the building was passed on to Writers’ House, which, according to its concept is an open institution. The main task of the Writers’ House is its transformation into an open space to represent Georgian culture - its traditions and modern processes. Today, Writers’ House is a place the writers and artist can share their works without uniting in separate unions and have the opportunity to get actively involved in significant international literary and art processes.